This old Blueberry iMac G3 350 MHz was given to me for free many years ago and last winter I finally got around to fixing it up. 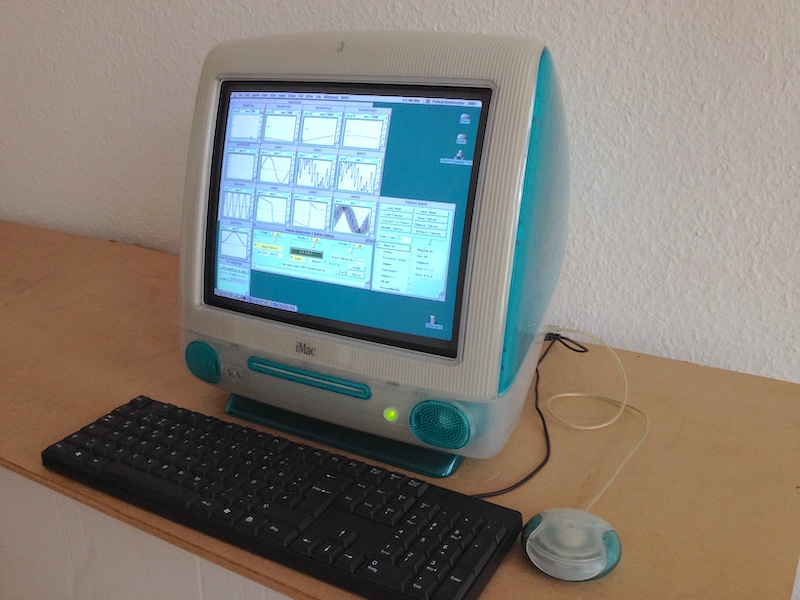 I set up the machine with three different operating systems...

and this computer I use for running various software from back in the days - mostly audio applications like SuperCollider 2.2.16, MaxMSP 4.0.9 with nato.0+55+3d, Mosaic 1.58 and Digital Performer 2.7.
The machine runs well and feels snappy despite it being so old. I optimised Mac OS X Tiger a bit by turning off Spotlight and Dock animations and I also installed ShadowKiller. In Mac OS 9 I removed some unnecessary extensions. OpenBSD is using the lightweight window manager dwm and in order to get the ATI Rage 128 graphics card working I configured Xorg as described in this forum post.

The internal 1/2 AA PRAM battery was dead and I replaced it with a CR2032 coin cell. The holder for the coin cell I soldered right on top of and across the old holder. It should be easy to remove and restore the original battery if ever needed. 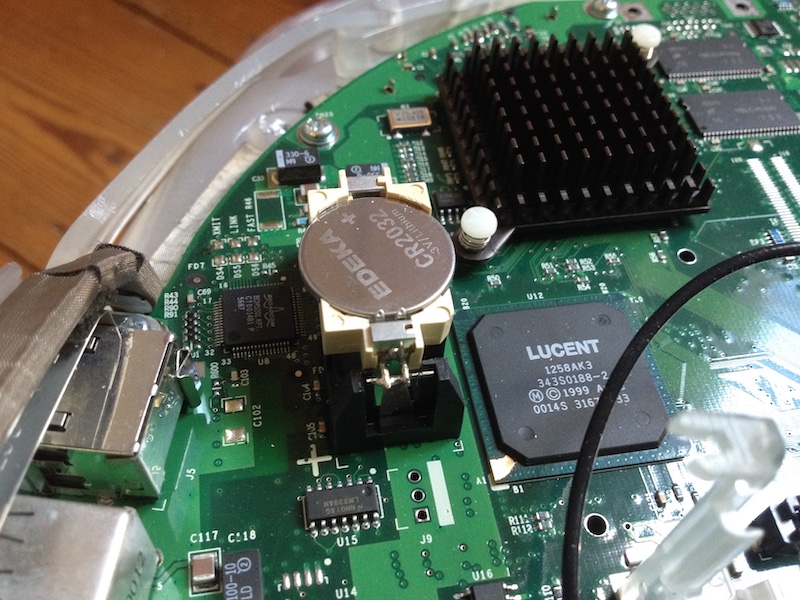 Some of the electrolytic capacitors inside looked suspicious and bulged so I replaced the seven SMD variants I found on the motherboard. The big through hole capacitors in the power supply section I left untouched. They seemed okay.

The old spinning hard disk was replaced with an SSD. To connect the SSD I bought an IDE to SATA adapter and used the existing 40-pin and power cables. I used velcro to fixate the SSD in place.

Unfortunately, this type of IDE adaptor is a bottleneck and will make the SSD underperform. Xbench report that the SSD perform only marginally faster than the original HDD for sequential reading and writing. Random access read/write on the other hand perform 4.5x faster. Taken together, the SSD is not more than around twice as fast as the HDD. Still, it was worth the cost and hassle to swap out the old spinning hard drive. A big plus is that the machine now runs completely silent.

I had a strange problem with the OS X system freezing at random times. I suspected the SSD adaptor and the power supply. By coincidence, I later noticed it would take longer until it froze if I only worked in the terminal. As soon as I touched the mouse, the system would lock up. So I tried replacing the optical tracking mouse (manufactured by sempre - model MOU-1T) with the original puck mouse, and then the system ran flawlessly. So the LED mouse caused the system to freeze!
This modern optical tracking mouse must be generating current spikes that the USB port can not handle.

Even though this is such an old and slow machine (22 years, 350 MHz), it is a lot of fun to use and play around with. It can also be of use as it runs some software that no longer exists and the CRT display gives out a warm nostalgic feeling.
A drawback is that it draws a lot of power. 75-85 Watts in use (mainly depending on screen brightness), 64 Watts in standby (sleep mode with CRT off) and 5.5 Watts when powered off! The change to SSD helped reduce power consumption a little bit (around 8 Watts), but overall it is still high compared to, for example, a Raspberry Pi.