My 14-years old MacBook Pro Core 2 Duo/Late 2006 is since a year acting as a kitchen radio.

The laptop is set up to dual-boot Mac OS X 10.6.8 Snow Leopard and FreeBSD (13.0 at the moment) via the rEFInd boot manager. Though I end up using OS X most of the time just because it boots a lot faster. The battery pack is dead so I need to power it on and off each time I use it.

SpiderWeb is my browser of choice, but I also have ArticFox and InterWeb installed. Performance is alright and I can stream radio and play YouTube videos in 480p - my preferred quality setting. In FreeBSD, I run a recent version of Firefox.

The computer is connected to a set of external computer speakers - a 2.1 subwoofer system - that I got for free and had laying around.

But this laptop has had a hard life and was with me on many adventures. Quite a few things were broken and I had to repair the keyboard, battery, power supply and fans.

The machine suffered a beer accident in Japan in 2008 and after that about a third of the keys on the keyboard wouldn't work. I kept using it for several years with the help of an external USB keyboard.

Last winter I spent a lot of time trying to finally repair this broken keyboard using a multimeter, tape and thin conductive wire... 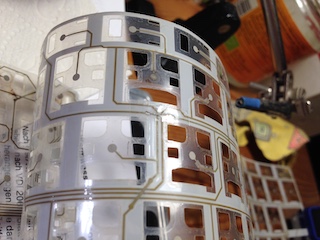 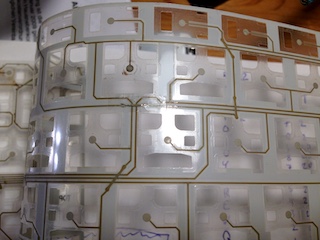 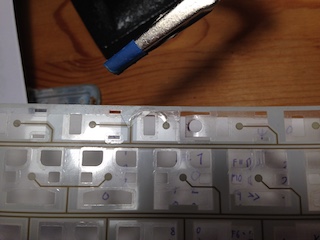 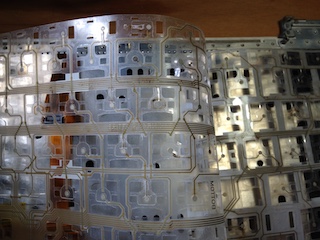 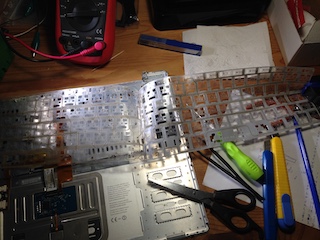 Many tracks were broken and corroded but amazingly I got it to work! At one moment, all keys functioned except the led in the caps-lock that wouldn't light up. Also, during the repair, I broke off one of the springy supports for the space bar, so it tilted and didn't react on the left-hand side. Very irritating and impossible to fix (at least by me).

And my repair attempt didn't last. After about a month, a few keys started acting funny, intermittent and finally wouldn't work at all. When even more keys broke, I gave up and ordered a replacement keyboard for this model (A1211) on AliExpress.

The right-hand side fan needed repair. It was stuck as the casing somehow got dented. I cleaned both fans thoroughly and added new silicone grease.

I maxed out the RAM by buying two 2 GB memory modules on eBay. There is an issue with this machine though as it can not address more than 3 GB. So even if I now have 4 GB installed, only 3 can be used.

The machine uses between 20 and 35 Watts in standard operation, and the cost of fixing it up was around €40 in total. It gets a lot of use and will probably last many years to come.