At UoW I also rewrote an old installation called The Intelligent Street. Mark d'Inverno and I had worked together on this one earlier and we now wanted it to run on a modern computer (OSX). We also wanted to redesign it a bit and make it into a standalone application.

The original Intelligent Street was a transnational sound installation were users could compose music using mobile phones and SMS. That, in turn, was an extended version of a yet older installation called 'The Street' by John Eacott. This totally reworked 'intelligent' version was premiered in November 2003 and realised as a joined effort between the Ambigence group (j.eacott, m.d'inverno, h.lörstad, f.rougier, f.olofsson) and the Sonic studio at the Interactive Institute in Piteå (way up in northern Sweden).

For the new OSX version, we dropped SMS as the only user interface and also removed the direct video+sound links between UK-SE that were part of the old setup. Except for that, the plan was to move it straight over to SuperCollider server (SC3) and rather spend time on polishing the overall sound and music.

I roughly estimated it would take just a few days to do the actual port. Most of the old code was written in SuperCollider version 2 (Mac OS9) and the generative music parts were done using SC2's patterns and Crucial libraries. So that code, I thought, would be pretty much forward compatible with our targeted SuperCollider 3. But sigh - it turned out that I had to rewrite it completely from scratch. The 'smart' tweaks and optimisations I had done in the old SC2 version in combination with the complexity of the engine made it necessary to redesign the thing bottom up. Even the generative patterns parts. Last I also dropped Crucial library for the synthesised instruments and did it all in bare-bone SC3.

But I guess it was worth the extra weeks of work. In the end, the system as a whole became more robust and better sounding. And standalone not to mention so hopefully it will survive a few years longer.

But I can also think of more creative work than rewriting old code. I've been doing that quite a lot recently. It feels like these old installations I've worked on earlier comes back to haunt me at regular intervals. And there is more and more of them for each year :-) 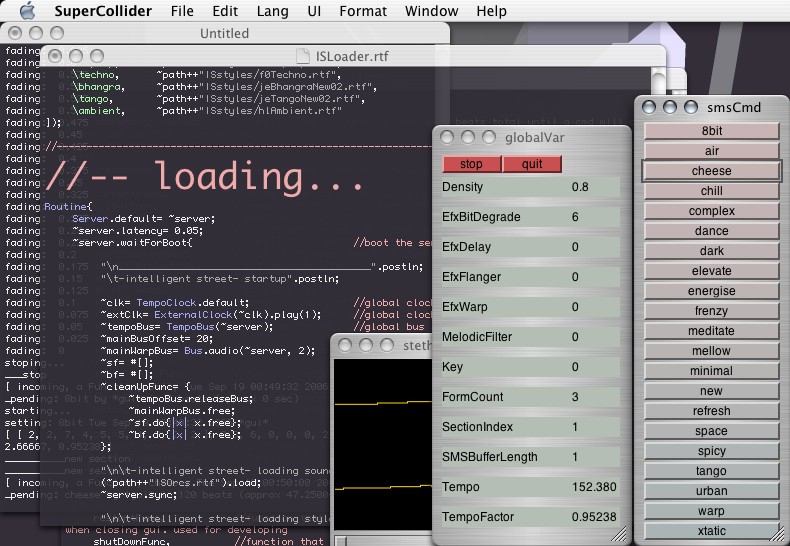